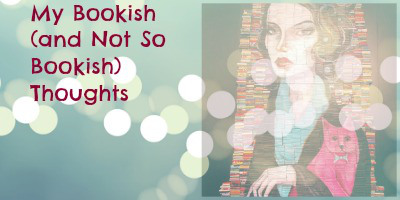 Good morning!  It’s another Thursday, which means the weekend is almost here…and it’s time to talk about our Bookish and Not So Bookish Thoughts with Bookishly Boisterous.  Check out Christine’s blog to see what others are chatting about.

Do I even have any thoughts today?  I have been sticking close to home, reading and watching movies.  I saw one the other night that I watched again the next day.  I loved it that much!  It was 5 Flights Up, with Diane Keaton and Morgan Freeman.

Okay, this is not a movie for everybody, but I was drawn in by the NY scenes, and the characterizations of Morgan Freeman and Diane Keaton.  Alex and Ruth, who are getting older, have lived in this Brooklyn apartment for 40 years, and they are tired of climbing those five flights up to the apartment.  Plus, the neighborhood is changing—gentrifying—and the aspects that drew them in the beginning are no longer there.

It was fun (for me) to watch them hold a hilarious open house, with TV in the background showing shots of a “terrorist” scene unfolding at the bridge.  Their realtor is Ruth’s niece Lily, portrayed by an intense and rather annoying Cynthia Nixon.  She did a great job of playing THAT kind of realtor.

They also looked at some apartments in Manhattan…and that was an eye-opener for them…and for me.

My reading started out great, with Little Black Lies, by Sandra Block, followed by Bittersweet and Every Fifteen Minutes.  (Click titles for my reviews).

Now I am struggling to get through The Shore.  Yes, I was forewarned that this is not for everyone.

Yes, it sounds lovely in the blurb:  “The Shore: a group of small islands in the Chesapeake Bay, just off the coast of Virginia. The Shore is clumps of evergreens, wild ponies, oyster-shell roads, tumble-down houses, unwanted pregnancies, murder, and dark magic in the marshes. Sanctuary to some but nightmare to others, it’s a place that generations of families both wealthy and destitute have inhabited, fled, and returned to for hundreds of years. “

Some of the stories are enchanting…while others, not so much.  My biggest problem with the novel is how it flips back and forth across time, picking up with characters at various points in their lives…and I didn’t think it was done that seamlessly.

But I plan to slog along a little longer….sigh.

Did anyone read it?  Thoughts?

I also started reading an e-Arc that is much better (for me):  Black-Eyed Susans, by Julia Heaberlin.

As a sixteen-year-old, Tessa Cartwright was found in a Texas field, barely alive amid a scattering of bones, with only fragments of memory as to how she got there. Ever since, the press has pursued her as the lone surviving “Black-Eyed Susan,” the nickname given to the murder victims because of the yellow carpet of wildflowers that flourished above their shared grave. Tessa’s testimony about those tragic hours put a man on death row.

Now, almost two decades later, Tessa is an artist and single mother. In the desolate cold of February, she is shocked to discover a freshly planted patch of black-eyed susans—a summertime bloom—just outside her bedroom window. Terrified at the implications—that she sent the wrong man to prison and the real killer remains at large—Tessa turns to the lawyers working to exonerate the man awaiting execution. But the flowers alone are not proof enough, and the forensic investigation of the still-unidentified bones is progressing too slowly. An innocent life hangs in the balance. The legal team appeals to Tessa to undergo hypnosis to retrieve lost memories—and to share the drawings she produced as part of an experimental therapy shortly after her rescue.

What they don’t know is that Tessa and the scared, fragile girl she was have built a  fortress of secrets. As the clock ticks toward the execution, Tessa fears for her sanity, but even more for the safety of her teenaged daughter. Is a serial killer still roaming free, taunting Tessa with a trail of clues? She has no choice but to confront old ghosts and lingering nightmares to finally discover what really happened that night.

***
So that’s what my week was like so far….and I have no idea what the weekend holds, other than reading and catching up on my DVR recordings.  What about you?

8 thoughts on “MY BOOKISH (AND NOT SO BOOKISH) THOUGHTS: BOOKS & MOVIES”