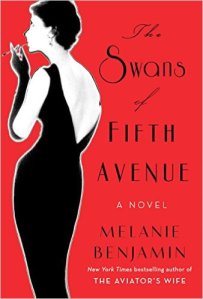 From the very beginning of The Swans of Fifth Avenue, I was drawn into the era and the settings, almost as if I were right there with them.

It helped that I had seen movies set in those times and with those characters (Capote, and Infamous), in which we watch Truman Capote mixing it up with the glamourous creatures known as Swans.

They could all be BFFs, judging from the secrets they tell each other and the parties they attend together.

But what was Truman really up to with these women? Did they feed his ego, and then did he turn on them? What changed for Truman and the “Swans” after the success of In Cold Blood? Why did the publication of a specific short story turn all of their lives upside down?

The author takes us into the private rooms of the characters, including some of their bedrooms, and despite Truman’s sexual orientation, at least one of the women lusted after him.

From the descriptions of the characters, they seem to spring to life on the pages, and we can almost hear the lively conversations, the giggles, and the secret-telling. We can definitely see the gorgeous rooms and clothes, and feel like we’re at the parties with them.

A fictionalized tale based on real people, the story was one that drew me in, even as I had the sense of foreboding that comes when people share too much of their hidden selves with those who could betray them.

And as their lives changed after the betrayal, some of them would still look back on those moments when they were caught up in a kind of swan dance, brilliant and beautiful and happy. And they would put another spin on events, allowing themselves to remember the luminescence. 5 stars.

*** I received this e-ARC from the publisher via NetGalley.

10 thoughts on “REVIEW: THE SWANS OF FIFTH AVENUE, BY MELANIE BENJAMIN”