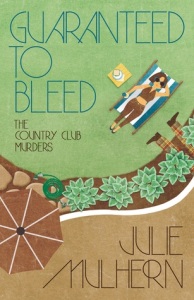 Ellison Russell has just returned from a trip to Europe with her daughter Grace, and is hoping for a little normalcy in her life. Her husband’s murder and a few other disastrous events have left her a bit stressed.

So she is attending a football game to root for her daughter and friends. Suddenly, she drops her lipstick under the bleachers. She starts digging around for it…after all, it was an expensive brand she bought in Paris. Imagine her surprise to discover a boy, who turns out to be Bobby Lowell, one of Grace’s friends, bleeding to death. He whispers to her: “Tell her I love her.”

Who did he mean? And who would have shot Bobby? These and other questions drive Ellison to do what she seems compelled to do: find answers.

But more bodies turn up before the end of Guaranteed to Bleed, along with a few disastrous secrets that could have motivated any number of people to kill Bobby and others. Why is Jonathan Hess, India’s new husband, and daughter Donna’s stepfather, such a bully, pushing his way into her home after a sleepover? What led Grace and Donna to run away, hiding out as if they have secrets they couldn’t tell?

The returning characters from Book One included Anarchy Jones, the homicide detective; Hunter Taftt, the attorney who has his eye on Ellison; her mother Frances, whose glares could wither anyone who crossed her; and Ellison’s best friend Libba.

Set in the 1970s, I enjoyed the reminders of that era like landlines and payphones, as well as mentions of Watergate and Nixon. The humorous and somewhat snarky voice of our first person narrator, Ellison, kept me turning pages, trying to guess what might happen next. Another delightful read from the author. 4.5 stars.

14 thoughts on “REVIEW: GUARANTEED TO BLEED, BY JULIE MULHERN”