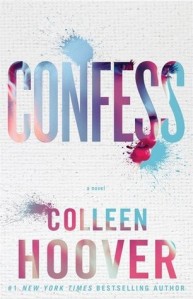 Was it fate that brought them together? Can there be two fates for a person in one lifetime? Auburn Reed and Adam were teenagers in love…and then he died.

Years later, Auburn is back in Dallas, Texas, where she had gone to be with Adam while he lay in the hospital dying. Why is she back? What made her leave Portland, where her family lived, when she hated Texas? Who is Lydia, and why does she seem to have a hold over Auburn?

We don’t find out the reasons for a while. But before we do, there is a moment when two more seemingly fated souls meet. Looking for a second job one day, Auburn stumbles upon a unique art studio. One which uses a very creative inspirational tool called confessions. Owen Gentry runs the studio, and hires Auburn for one event. He explains the use of “confessions” in his work.

There is something extra that connects them from the very first moments; something more than just the fact that they both have the middle name “Mason,” which gives Owen the quirky initials OMG. Something indescribable. But it feels real.

Watching the two of them over the course of only a couple of days felt a little like seeing “insta-love” unfold, except for the fact that they aren’t labeling it. They are comfortable with each other, can talk for hours, and they just connect.

The secrets they are keeping and how there is more to their stories kept me reading, hoping to find out all the details. The tension arises as we discover the connections between the characters, and realize the hold that Lydia and her son Trey have over Auburn. I hated them both from the beginning, and seeing their antics and how they managed to control Auburn made me want to throw something at them.

Portions of Confess moved slowly for me, but then the tension ratcheted up, and in the end, I was turning pages so quickly, rooting for Auburn and Owen, and sending hate vibes to Trey and Lydia…and then, with relief, I was brought back to earth by the final reveal. 4 stars.