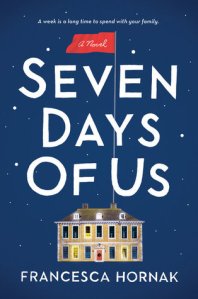 It’s Christmas, and for the first time in years the entire Birch family will be under one roof. Even Emma and Andrew’s elder daughter—who is usually off saving the world—will be joining them at Weyfield Hall, their aging country estate. But Olivia, a doctor, is only coming home because she has to. Having just returned from treating an epidemic abroad, she’s been told she must stay in quarantine for a week…and so too should her family.

For the next seven days, the Birches are locked down, cut off from the rest of humanity—and even decent Wi-Fi—and forced into each other’s orbits. Younger, unabashedly frivolous daughter Phoebe is fixated on her upcoming wedding, while Olivia deals with the culture shock of being immersed in first-world problems.

As Andrew sequesters himself in his study writing scathing restaurant reviews and remembering his glory days as a war correspondent, Emma hides a secret that will turn the whole family upside down.

In close proximity, not much can stay hidden for long, and as revelations and long-held tensions come to light, nothing is more shocking than the unexpected guest who’s about to arrive…

My Thoughts: In alternating narratives, Seven Days of Us revealed the Birch family dynamics, showing us how each family member experienced the enforced togetherness.

Olivia, back home from saving lives in Liberia, was my favorite character. She was definitely not that thrilled to be in such close proximity to her family members, since she had been away and following her own path for years.

Emma, the matriarch, was definitely someone used to giving of herself, even to her own detriment. Her secret will change her life and her family going forward.

Phoebe, as the youngest and the only one of the offspring still living at home (at twenty-nine!) was an annoying, entitled brat, IMO. Everything all week long was all about her and her marriage plans. It was interesting to watch how things changed for her when her fiancé made a big and unexpected decision. She started to show a little bit of empathy for others.

Andrew, the patriarch, seemed oblivious to much that was going on, but when the surprise guest arrived, he began to look at life differently, even starting to assess some of his choices.

The setting of the dilapidated cottage surrounded by beautiful countryside brought me right into the lives of this English family, and I could imagine spending a week there in real life. The ending brought some good and some sad moments for the characters. There was something to savor in this story that felt so real, and earned 5 stars from me.

17 thoughts on “REVIEW: SEVEN DAYS OF US, BY FRANCESCA HORNAK”