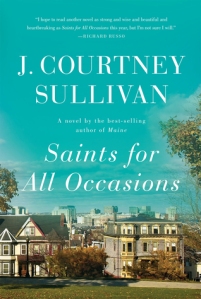 Nora and Theresa Flynn are twenty-one and seventeen when they leave their small village in Ireland and journey to America. Nora is the responsible sister; she’s shy and serious and engaged to a man she isn’t sure that she loves. Theresa is gregarious; she is thrilled by their new life in Boston and besotted with the fashionable dresses and dance halls on Dudley Street. But when Theresa ends up pregnant, Nora is forced to come up with a plan—a decision with repercussions they are both far too young to understand. Fifty years later, Nora is the matriarch of a big Catholic family with four grown children: John, a successful, if opportunistic, political consultant; Bridget, quietly preparing to have a baby with her girlfriend; Brian, at loose ends after a failed baseball career; and Patrick, Nora’s favorite, the beautiful boy who gives her no end of heartache. Estranged from her sister, Theresa is a cloistered nun, living in an abbey in rural Vermont. Until, after decades of silence, a sudden death forces Nora and Theresa to confront the choices they made so long ago. A graceful, supremely moving novel from one of our most beloved writers, Saints for All Occasions explores the fascinating, funny, and sometimes achingly sad ways a secret at the heart of one family both breaks them and binds them together.

My Thoughts: Saints for All Occasions can be described primarily as a family saga, richly layered with the hopes and dreams of characters who left their homeland of Ireland and settled in Massachusetts. Their Catholic faith dictated many of their choices, and as they began their new lives in mid-century America, they tried to fit in while still maintaining their family values.

Two sisters, Nora and Theresa Flynn, could not have been more different from one another. Nora took on the role of the responsible one, while Theresa flourished by attending dance clubs while also planning for a teaching job.

But their hopes and dreams took a detour when something happened to Theresa. An unexpected event that would change both of their lives. Over time, their small choices would add up to a life, albeit a life filled with secrets. Some of those would stay with them forever.

Alternating narratives take us back and forth in time, showing us what was going on with each sister from the beginning until their later years.

The second generation of immigrants had a very different take on what their lives should look like, and a departure from the values of their parents would create conflicts. But Nora, as the matriarch, had a way of ignoring the things she did not like, almost as if she had detached herself from the realities of life.

Through the multiple narrators, we came to know the characters, fleshed out and flawed, who looked like real people we might have known. In the end, a sense of acceptance seemed to prevail…but many secrets still remained. As in life, sometimes there is no true closure. 4.5 stars.

6 thoughts on “REVIEW: SAINTS FOR ALL OCCASIONS, BY J. COURTNEY SULLIVAN”