Today’s feature is a recent acquisition:  I Know You Know, by Gilly Macmillan, is a chilling and twisty mystery about two shocking murder cases twenty years apart, and the threads that bind them. 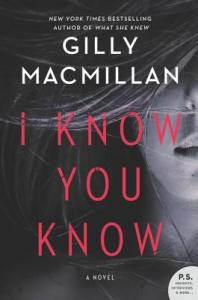 He saw the pit from the motorway.  He had a bird’s-eye view from the overpass and another glimpse from a meaner angle as the car came down the exit ramp.  The wipers were going like the clappers.  He saw the backs of the gathered construction workers.  The pit was a muddy gash in the car park in front of them, and the sticky clay soil inside it a dull dirty orange.  Fletcher and Danny parked near the entrance to the superstore, at the end of a line of cars in disorderly formation.

Teaser:  Fletcher stopped packing the car.  He detected a hint of possibility in his wife’s eye as she described how she had a new love and how they planned to build a new life together.  Listening to her, he was seized by a feeling of disorientation and loss, as if he was being left behind  in life’s gloaming. (p.  56).

Synopsis:  Twenty years ago, eleven-year-olds Charlie Paige and Scott Ashby were murdered in the city of Bristol, their bodies dumped near a dog racing track. A man was convicted of the brutal crime, but decades later, questions still linger.

For his whole life, filmmaker Cody Swift has been haunted by the deaths of his childhood best friends. The loose ends of the police investigation consume him so much that he decides to return to Bristol in search of answers. Hoping to uncover new evidence, and to encourage those who may be keeping long-buried secrets to speak up, Cody starts a podcast to record his findings. But there are many people who don’t want the case—along with old wounds—reopened so many years after the tragedy, especially Charlie’s mother, Jess, who decides to take matters into her own hands.

When a long-dead body is found in the same location the boys were left decades before, the disturbing discovery launches another murder investigation. Now Detective John Fletcher, the investigator on the original case, must reopen his dusty files and decide if the two murders are linked. With his career at risk, the clock is ticking and lives are in jeopardy…

Do the excerpts grab you?  Would you keep reading?

28 thoughts on “RAINY DAY EXCERPTS: “I KNOW YOU KNOW””