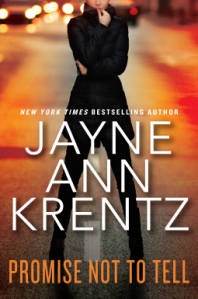 A painter of fiery, nightmarish visions throws herself into the sea—but she’ll leave some of her secrets behind…

Seattle gallery owner Virginia Troy has spent years battling the demons that stem from her childhood time in a cult and the night a fire burned through the compound, killing her mother. And now one of her artists has taken her own life, but not before sending Virginia a last picture: a painting that makes Virginia doubt everything about the so-called suicide—and her own past.

Like Virginia, private investigator Cabot Sutter was one of the children in the cult who survived that fire…and only he can help her now. As they struggle to unravel the clues in the painting, it becomes clear that someone thinks Virginia knows more than she does and that she must be stopped.

Thrown into an inferno of desire and deception, Virginia and Cabot draw ever closer to the mystery of their shared memories—and the shocking fate of the one man who still wields the power to destroy everything they hold dear.

My Thoughts: Two children who had escaped a burning barn fire in Quinton Zane’s cult 22 years ago are reunited in the early part of Promise Not to Tell. Cabot Sutter was one of the children, and Virginia Troy was another.

Before Hannah Brewster’s death, she had been sending paintings to Virginia, who owned an art gallery. Something in Hannah’s latest painting, of which Virginia has a photo, stirs up some questions.

Anson Salinas heads up a team of investigators, and because he raised three of the children saved from that fire, including Cabot, he has a vested interest in learning more secrets.

Set near Seattle and on one of the San Juan Islands, the story captured my interest from the beginning. There was a great mix of mysteries from the past and current attractions that kept me turning the pages.

What do Cabot and Virginia learn after another fire reveals some previously unknown connections? Why do some of the people in a high tech company show signs of nefarious intent?

I loved the mix of mystery and the hint of future normalcy, which included glimpses of other connections, like Virginia’s grandmother Octavia.

The hint that Quinton Zane might still be alive hovers over the story, and near the end, there is a suggestion of more drama and mystery ahead. A captivating 5 star read for me.